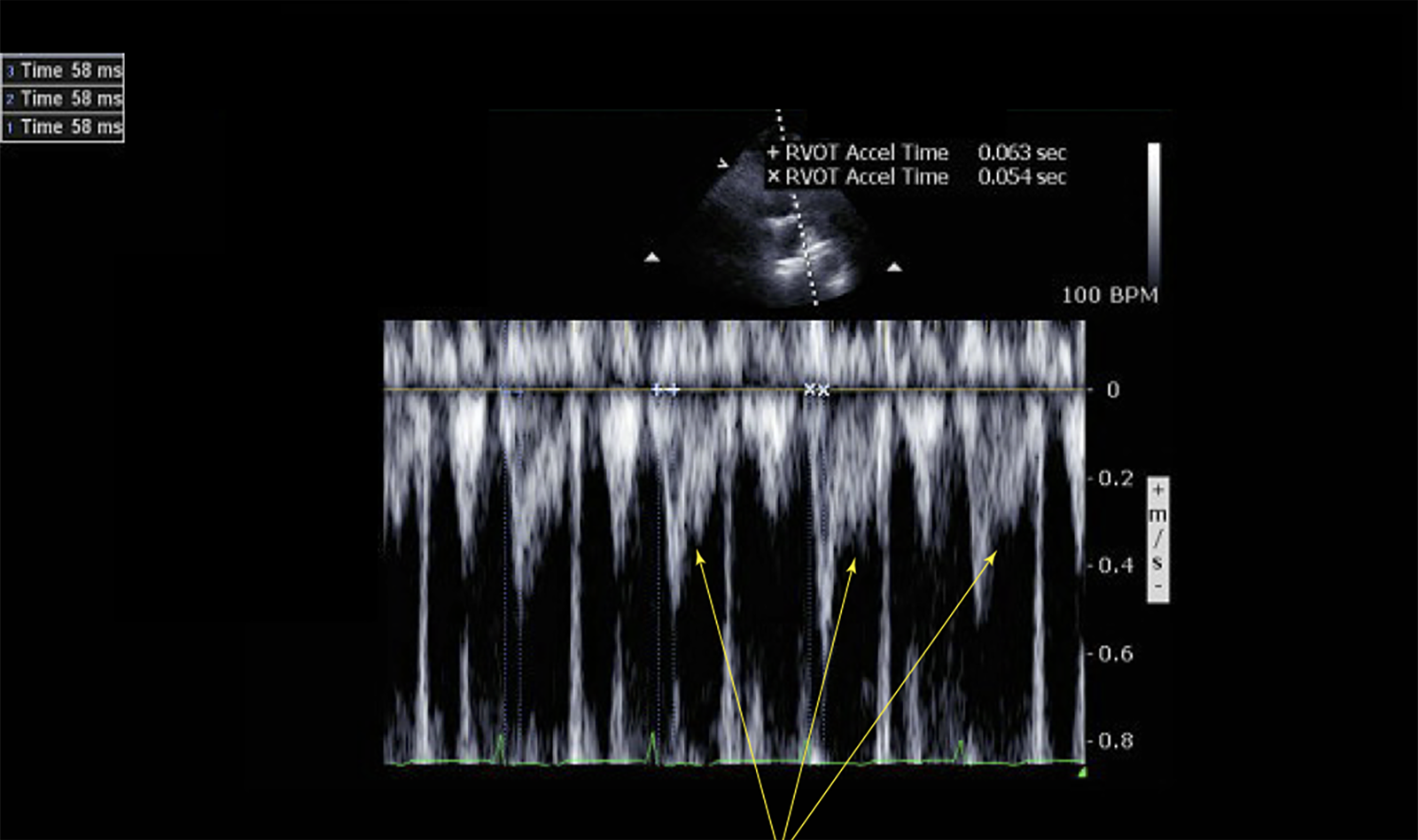 The reported in-hospital mortality of patients with massive PE (MPE) varies from 25% to 50%, and the mortality for submassive PE (SMPE; deﬁned as the presence of right ventricular [RV] dysfunction without systemic hypotension) ranges from 3% to 15%. The mortality associated with low-risk, or subsegmental PE (SSPE) is < 5%.

Traditionally, the most frequently used noninvasive imaging modality for the diagnosis of acute PE include the multidetector row computed tomographic angiography (CTA) and, to a lesser extent, ventilation-perfusion lung scanning

The role of echocardiography in the workup of suspected PE has historically been supportive and primarily reserved for the detection of RV strain or dysfunction in unstable patients. The purpose of this study was to provide a head-to-head comparative assessment on the performance of several echocardiographic variables in a cohort of patients with MPE or SMPE identiﬁed following CTA for suspected PE.

This was a retrospective study of all cases of contrast CTA performed for suspected PE at a tertiary care hospital.

RV strain, dilation, or dysfunction was deemed present if four-chamber RV diameter divided by left ventricular diameter was > 0.9 on CTA. The diagnosis of PE was conﬁrmed when thromboemboli were visualized in an at least segmental pulmonary artery on CTA.

Patients with PE were stratiﬁed according to 2011 deﬁnitions recommended by the American Heart Association scientiﬁc statement.  MPE was deﬁned as acute PE with sustained hypotension (systolic blood pressure < 90 mm Hg for >15 min or requiring inotropic support, not due to other causes (e.g. arrhythmia, hypovolemia, sepsis, or left ventricular dysfunction, etc.).

Echocardiographic variables were analyzed from transthoracic echocardiograms. PW Doppler interrogation of the RVOT was performed from the parasternal short-axis view at the level of the aortic valve or from the subcostal short-axis view, with the sample volume placed approximately 0.5 cm proximal to the pulmonic valve. The ‘‘early systolic notching’’ (ESN) pattern (spike and dome morphology) was visually assessed and deemed present if the Doppler envelope exhibited a narrow peaked initial wave (spike) with early deceleration of the RVOT envelope producing a sharp notch within the ﬁrst half of systole, followed by a second Doppler wave (dome) that was more curvilinear in appearance.

Midsystolic notching was deﬁned as a distinct notch falling within the second half of the systolic ejection period or, if the nadir occurred closer to the end of ejection, dividing the ﬂow proﬁle into two distinct peaks. Notch morphology was best appreciated when the Doppler beam was aligned parallel to RVOT outﬂow, with the PW sample volume placed at the appropriate location at sweep speeds of 50 to 100 mm/sec.

The 60/60 sign was deemed present if RVOT AT was < 60 msec in the presence of a tricuspid peak systolic gradient > 30 mm Hg but < 60 mm Hg. Regional pattern of RV dysfunction consistent with McConnell’s sign was deﬁned as akinesia of the mid free wall visualized along with preserved apical contractility.

526 out of 5,152 (10.2%) patients had positive results for PE (including MPE or SMPE and SSPE). After initial screening criteria, a total of 260 patients from this group were short-listed for further analysis. Upon further screening and application of exclusion criteria (limited studies, RVOT PW Doppler data not recorded, or Doppler data recorded but technically inadequate for interpretation moderate or greater valvular disease), a total of 187 patients with PE qualiﬁed and were included in the ﬁnal analysis. The reference group included a total of 90 patients without PE who met our selection criteria.

ESN was observed in 92% of patients with MPE or SMPE, 2% of those with SSPE, and in no patients without PE. There was good interobserver agreement in the identiﬁcation of ESN, with 96.7% agreement (k = 0.93, P < .001). Among patients with SSPE, systolic notching was predominantly midsystolic (19%) and less likely early systolic (2%).

The authors concluded that in patients with suspected acute PE, the pulmonary Doppler ﬂow pattern of ESN has potential clinical utility for the detection of MPE or SMPE.

They commented on the fact that echocardiography has traditionally been relegated to a supportive role in the evaluation of patients with suspected PE and used primarily to assess RV size and function in hemodynamically unstable patients.

Other echocardiographic parameters described in the literature – McConnell’s sign, the 60/60 sign, paradoxical septal motion, and RV dilation – can be helpful and supportive, but lack the desired sensitivity, speciﬁcity, or negative predictive value (reported to be about 40%–50%) to be incorporated as ﬁrst-line options in evaluation algorithms for suspected PE

In contrast, this study suggests that the simple visual assessment of RVOT Doppler morphology offers potentially insightful information on the coupling dynamics between the right ventricle and the pulmonary vasculature.