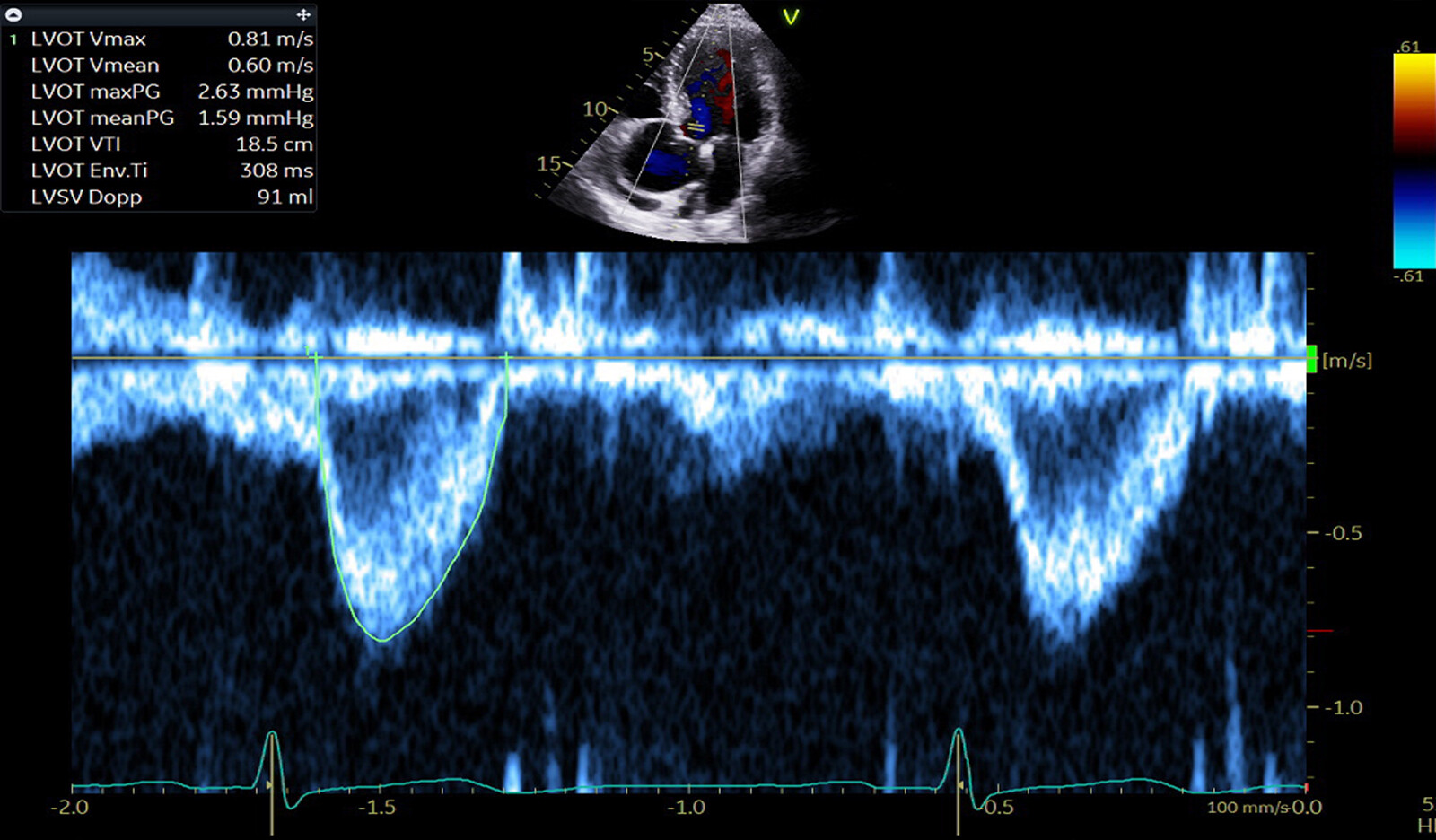 Echocardiography has been used in the critical care setting for a long time. Several echocardiographic algorithms have been developed with the aim to guide in the assessment of hemodynamic shock in critically ill patients. These algorithms, however, focus mainly on the heart structural and do not offer a clear guide on how to interpret the findings in a complex clinical context. This, in turn, may lead to starting unnecessary treatment or support measures.

The aim of this article is to show a simple algorithm based on left ventricle outflow tract (LVOT) velocity time integral (VTI) for differential diagnosis in hemodynamic shock proposed by the Spanish Critical Care Ultrasound Network Group.

This algorithm is based on LVOT velocity–time integral measurement, giving a more functional perspective to the use of echocardiography in the critical care setting.

This functional perspective is based on measuring forward flow by LVOT VTI measurement or right ventricle outflow tract (RVOT) VTI, which will allow for the measurement of variables related to perfusion (preload, afterload and contractility). This variable integrated into clinical context may have a potential role in the differential diagnosis for hemodynamic shock in critically ill patients.

Assessment of hemodynamic status is based on two concepts: perfusion and congestion. This review, however, focuses on perfusion parameters rather than congestion.

The concept of VTI-based algorithm for the assessment of hemodynamic is presented as a case series of four patients.

The authors present a case of a 73-year-old patient with a medical history of diabetes mellitus on insulin, hypertension and dilated ischemic heart disease (IHD) with left ventricle ejection fraction (LVEF) of 25–30% who presented acute cholecystitis and had to be operated on.

After anesthesia induction a profound hypotension (BP 60/30) and tachycardia (HR 100 bpm) refractory to volume and low-dose administration of ephedrine.

Urgent echocardiography demonstrated severe left ventricular systolic function impairment. According to structural algorithms, the images showing low LVEF would lead to initiation of inotropic support to improve contractility. However, the use of echocardiography from the hemodynamic and functional perspective, an adequate forward flow was showed – LVOT VTI of 10 cm and cardiac output of 5.9 L/min. Since it is known that this patient has severe dilated cardiomyopathy with adequate stroke volume was maintained. Inferior vena cava (IVC) diameter was 20 mm with a distensibility of 10%. Mitral-inflow E/A ratio was 1.2.

In this case, adequate forward flow (VTI of 19 cm) helped the authors with the differential diagnosis, leading to suggest that the most likely cause of hemodynamic shock was the low vascular resistance due to anesthetic drugs and treating with vasopressors rather than inotropic support or fluids.

The second case is of a 67-year-old male who was admitted to ICU for the management of post-operative shock. He underwent peripheral abscess drainage in the left arm. His past medical history is notable for chronic kidney disease on hemodialysis, two previous episodes of Pulmonary Embolism (PE) on anticoagulant treatment and chronic IHD secondary to a myocardial infarction (MI). Two-hours after surgery the patient experienced severe hypotension with tachycardia of 110 bpm and signs of tissular hypoperfusion (lactates of 4.5 mmol/L and ScvO2 63%).

TTE demonstrated moderated bi-ventricular systolic dysfunction. VTI was 21 cm and assessment of fluid responsiveness, measured by the passive leg raising technique using VTI was 13% (VTI increased from 21 cm to 24 cm), suggested that the patient was fluid responsive. IVC diameter was 15 mm and distensibility of 20%.

Almost all echocardiographic structural parameters related to perfusion are impaired, and therefore, these values may be confusing.

Based on the authors’ perfusion algorithm, it was determined that adequate forward flow is present – VTI of 21 cm and that the patient was fluid responsive. In the context of hemodynamic shock associated with hypotension for this patient, the main contributor is likely a distributive shock secondary to low systemic vascular resistance (SVR). Fluid therapy was given first, followed by vasopressors with significant hemodynamics improvement and reassessment was performed later.

The third case is of a 42-year-old female with no past medical history, who was admitted with a perforated duodenal ulcer secondary to NSAIDs use. Her management required urgent laparotomy surgery, which was complicated by intra-op bleeding.

A few hours later bigeminy was observed. Repeated TTE showed an anterior, anteroseptal, medial and apical akinesia. VTI was measured to be 14 cm and LVEF of 35% was seen. IVC was 22 mm and distensibility with mechanical ventilation was 5%. Trans-mitral inflow E/A ratio was 1.9. Hypotension and tachycardia (100 bpm) were developed requiring increasing dose of vasopressors and adding vasopressin.

The low VTI of 14 cm associated with a dilated IVC with no distensibility and E/A ratio of almost 2, suggested that the cause of the hemodynamic shock was a mixed distributive and cardiogenic shock due to stress cardiomyopathy, confirmed by a normal coronary angiography.

Dobutamine infusion was initiated, and diuretics were given with a significant hemodynamic improvement leading to a decrease of noradrenaline and increase of VTI in LVOT to 17 cm. Dobutamine was stopped 4 days later because LV contractility had recovered and VTI at the LVOT improved (21 cm).

The fourth case is of a 65-year-old man with past medical history significant for hypertension, diabetes, and ischemic cardiomyopathy with preserved LVEF was admitted with a perforated ascending colon due to a cancer. He underwent exploratory laparotomy and right colectomy.

Passive leg raising test was performed – VTI increased by 15%, suggesting that the patient would be fluid responsive. Hemodynamics improved with the administration of 500 cc fluid bolus.

Low VTI (16 cm) associated with a small IVC of 8 mm with a distensibility of 20%, along with, low filling pressures and fluid responsiveness suggested that the patient was hypovolemic.

The authors believe that this simple algorithm help guide the decision-making for the differential diagnosis of hemodynamic shock. It represents a shift in the classic hemodynamic shock assessment and management guide by echocardiography. This shift consists of moving from a more structural perspective to a more functional one.