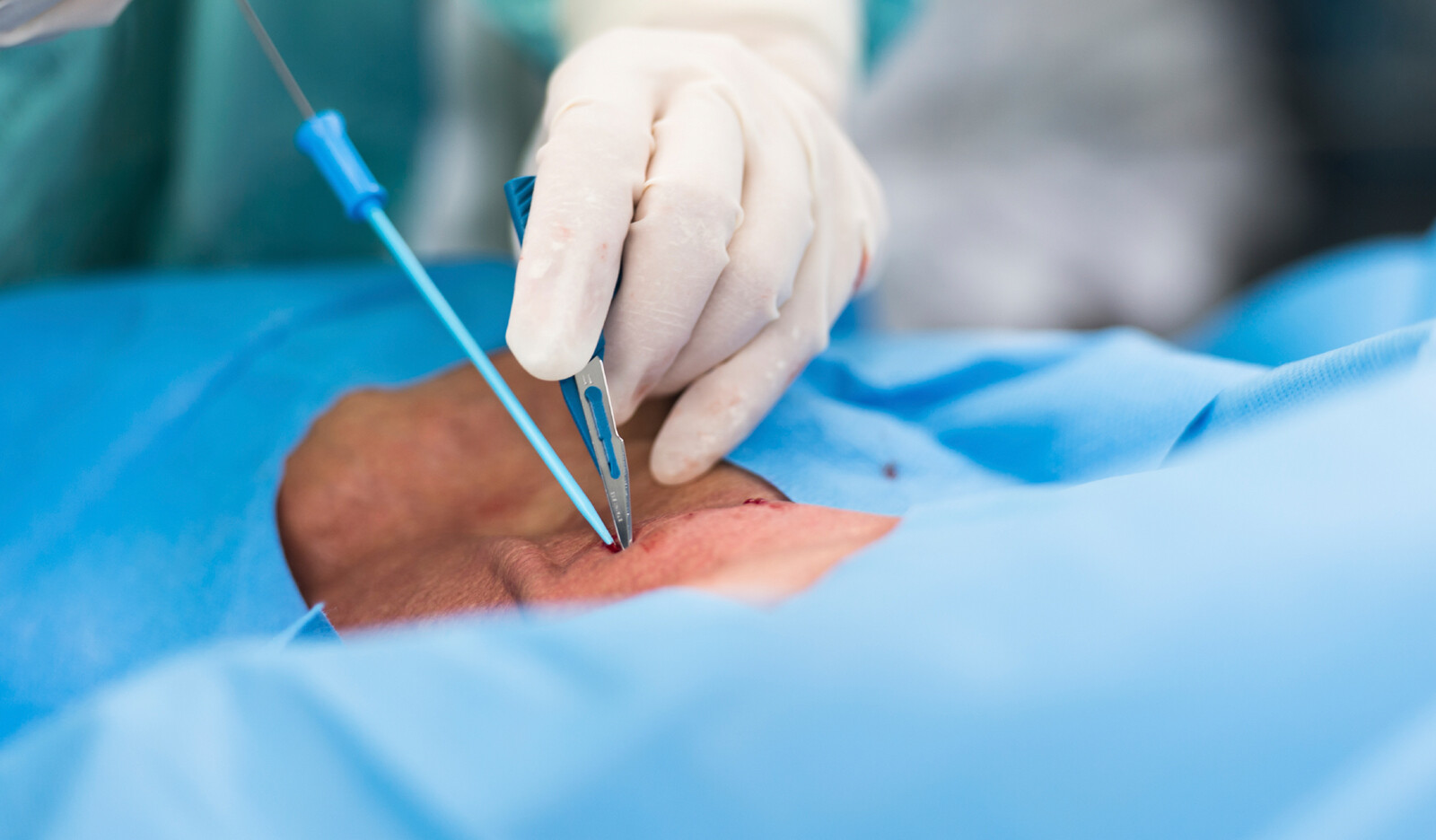 The internal jugular vein (IJV) is a commonly used cannulation site for central venous access as it is easily accessible due to its superﬁcial anatomical position. The traditional landmark-based technique for IJV cannulation depends on it having a lateral position relative to the common carotid artery (CCA).

In 2005, the National Institute of Clinical Excellence recommended ultrasound guidance for central venous line placement because it has reduced the risk of arterial puncture, improved success rates and reduced the time required for line placement.

Ideally, the probe should be placed perpendicular to the skin of the anterior neck to achieve optimal scanning and avoid coupling artifacts. However, due to the round shape of the human neck, the probe cannot be placed in a strict anterio-posterior direction and instead, the scanning is performed from lateral to medial. This view depicts the IJV as more anterior to the CCA. Overlapping of the IJV and the CCA predisposes a patient to an increased risk of CCA injury if the needle transverses the IJV.

The purpose of this study was to determine IJV position in relation to the CCA when ultrasound is used for vascular access.

Six hundred ultrasound examinations of the IJV and the CCA of awake patients in supine position were performed. In 300 patients, the head was rotated 30° to the contralateral side.

Examinations were performed at the level of the cricoid, which was identiﬁed by palpation. The transducer was coupled to the skin at an angle of 45° by determining the middle of a line between the anterior cricoid to the lateral (horizontal) part of the neck.

The CCA was depicted in the middle of the ultrasound image. Probe pressure was kept as low as possible to avoid compression of the IJV.

IJV dimensions were assessed by viewing longitudinal and cross-sectional images. The center of the vein was deﬁned as the intersection of the diameters, and ultrasound images were taken. The center of the vein deﬁnes the position of the IJV in relation to the CCA based on a pre-determined classiﬁcation, in which the top of the ultrasound image was deﬁned as the anterior surface.

In the second part of the study, for 300 participants, the head was rotated 30° to the contralateral side. On the left side, head rotation caused a signiﬁcant change of the IJV position in the anteromedial segment, in that the IJV was placed more frequently in the anterior and anterolateral segments. On the right side, head rotation of 30° to the contralateral side had no signiﬁcant impact on the IJV position in relation to the CCA.

Due to the round structure of the human neck anatomy, ultrasound scanning solely from anterior to posterior is not possible. Instead, lateral scanning is performed to achieve the best coupling of the transducer to the skin.

The position of the ultrasound probe has a strong impact on the depiction of the IJV in relation to the CCA. With optimal transducer coupling more lateral to the neck, the IJV is frequently depicted as more anterior to the CCA.

This means that lateral scanning falsely depicts the IJV as more anterior to the CCA. The authors found that in comparison to the CCA, the IJV is depicted anteriorly or medioanteriorly in 48.7% on the right and 58.7% on the left, with lateral appearance in only 3–3.3% of the 600 study participants.

An anterior IJV position increases the risk of CCA puncture if the needle transverses the IJV. Posterior wall penetration of the IJV occurs frequently due to the smooth and collapsible nature of veins. To avoid arterial punctures, ultrasound is recommended not only for visualization of the IJV and the needle but also for deﬁning the best individual puncture site by scanning along the neck.